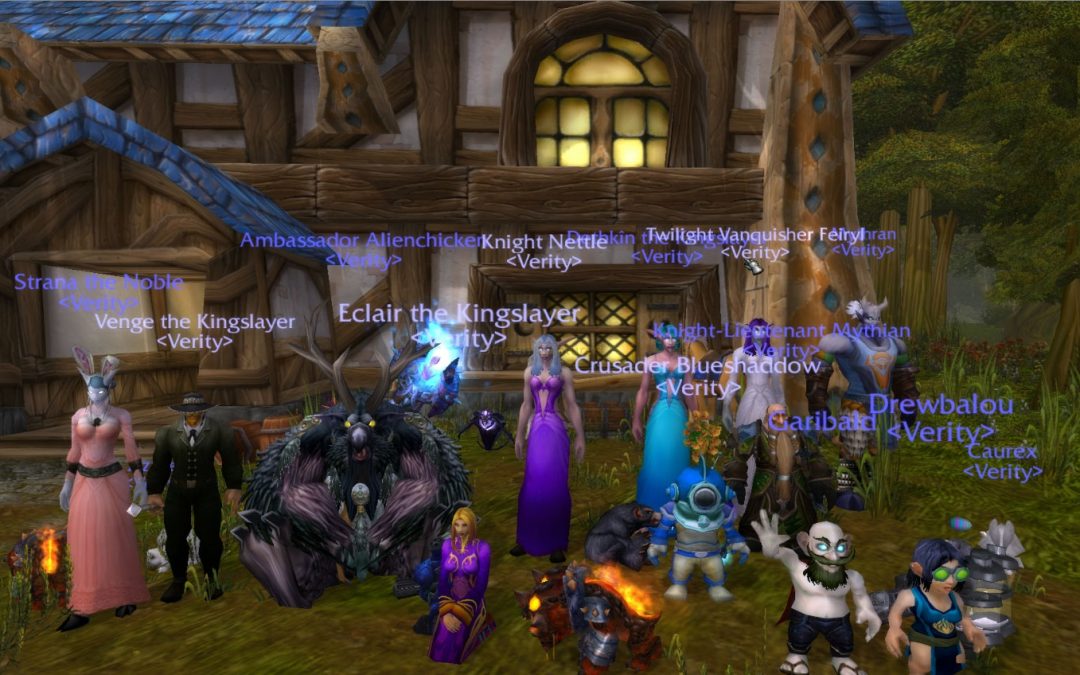 Verity’s 1st annual Gnaked Gnome Gala was a blast for all! We got to see Stran in a dress (again) and later as the Goldshire Bunny. It was a treat seeing everyone come out in their finest and show off their pets and dance moves while Blueshaddow wailed on his axe. And the contests? Great fun with some close results and we’ve got the pictures to prove it. Check out the gallery below the gala story after the jump.

Venge divided everyone into brackets for 1v1 face-offs. The winner of each match moved up until we had the final four:

Gari and Deth both won their matches to qualify for the final. It was a close match, but Garibane took first place and 500g in Verity’s Steam Tonk Wars.

The Vergnomes were given a series of clues to discover the whereabouts of another player character. Unfortunately the corpse timers are much shorter nowadays and the target poofed in a matter of minutes. Eclair, Drewbie, Stran, Garibane, Alienchicken and Skuld were among those that narrowed down the “treasure.” Since it was impossible to determine our winner the way it was intended we decided it with a random drawing and once again Garibane won the grand prize, this time 1000 gold.

Next, the Vergnomes were summoned to The Great Lift in the barrens. It wasn’t long before it became clear the meaning of the next contest…

The object? Jump from The Great Lift and try to come as close to the target as possible. In this case the target was Zathon’s underwear. Eclair was the first to take the plunge and landed pitifully too far away. The next half dozen jumpers, Deth, Blue, Stran, Alienchicken, Caurex, Drewbie and Mythran came closer than EC and remarkably close to one another. It wasn’t until Azthea’s jump that it became clear she owned everyone. Especially Mythian, laying somewhere, away from everyone else and out of view.

Congratulations Azthea on your skillful jump and 750 gold grand prize!

It was time to summon again, this time to the Gnaked Gnome Race starting line which could be anywhere…

Southshore quickly became overrun with Vergnomes. As they took their places behind the starting line you could tell from the look on their faces this was serious business. “Go!” was shouted and they quickly fanned out fighting for the lead. Sadly, Vergnomes are perfectly bite-sized for bears. Caurex, Mythian, Eclair and Deth took an early lead dodging and weaving through bears and spiders. Somehow Caurex and Mythian were able to avoid near fatal encounters including a poisoning by one of the local arachnids.

The Vergnomes took their chances with different routes through the wilderness. Some, like Blueshaddow, braved the waters and tried swimming the lake, while others like Deth and Skuld stuck to the path. Then there were those who knew no fear and tried their hand at off roading. One thing was clear, Stran kept dying.

Nettle waited for the front runners by the Undercity’s gates. Sure enough two Vergnomes were neck and neck for first place. Verdeth in the lead with Verskuld close on his heals. Deth was able to get the wave off first and claimed the grand prize of 1500 gold. Skuld claimed the runner up prize of 500 gold. What a race!

Well done everyone and congratulations to 1st place winner Dethknight and runner-up Skuld!

Throughout the gala random drawings took place with the following winners:

Thank you all for coming out and making the event a success. We look forward to an even bigger gala next year!